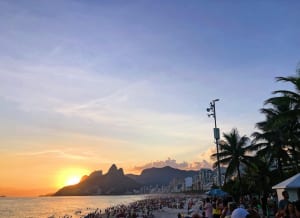 Rio de Janeiro, meaning the River of January, is a place that pretty much has it all. With beautiful warm beaches, vibrant city life and luscious green mountains, there really is something for everyone. Whether you want to just relax on the beach, surf, hike the tropical mountains, dance at a local nightclub, explore the metropolitan area, or go on a more extreme excursion – Rio can make for an amazing trip.

If I could describe Brazilian culture using only two words they would be lively and inviting. The Brazilian people are super friendly, welcoming and passionate about enjoying life and living it to the fullest! Each year in February, over one million people visit Rio from all over the world to celebrate Carnival. This festival involves multiple parades throughout the country with massive elaborate floats, music, professional dancers, and more! Traditionally, Carnival celebrates the last days before Ash Wednesday – kicking off the Catholic Lent season. You’ll see the streets come alive with people of all ages dressed up in vibrant costumes, dancing to live music all around. It’s definitely a once-in-a-lifetime experience. Don’t forget, Rio is also known for their futebol, or soccer. The season is usually around May through December if you wanted to plan a trip during that time.

Brazil does have some issues with crime, but that shouldn’t steer you away from visiting. There are safety precautions and some tips (mentioned below) you should follow before hopping on the plane to head south of the border.

I hope this blog will not only inspire you to take a trip to Rio, but also to venture off the beaten path and maybe step out of your comfort zone. There’s so much to see and learn from this vivacious culture. Below are some recommendations, tips, and fun information to motivate you to visit Rio. Enjoy!

Dancers in the Carnival Parade, February 2020

Places to see & things to do: 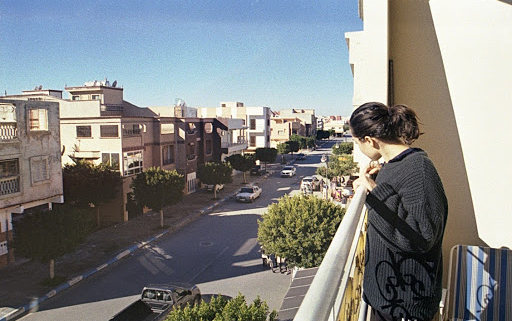 I didn’t know much about Morocco before going there. I had read The Alchemist, and heard the name a few times, so I knew it existed, but that was about it. Of course when I found out my Peace Corps assignment had been switched from Mozambique to Morocco, I did some research, but I only had a month or two to learn about it before shipping out. A well-traveled friend of ours actually told us not to go there because he had an unpleasant experience when he visited. My mother-in-law was worried about us going to an Islamic country. Meanwhile I watched surf videos and skate videos and became enchanted with the idea of goats in trees, colorful marketplaces and camel rides in the desert. I was enticed at the prospect of learning Arabic because I had been to Israel and Palestine and loved it, and saw a potential future for myself in Middle Eastern conflict resolution. I heard about harassment and unwanted attention, but felt excited to take that on as well as a recently certified empowerment self defense instructor. I wanted to learn more about the most misunderstood and misjudged world religion and study the Quran. What’s more, whenever I mentioned to anyone that I was going to Morocco, the first thing they always mentioned was the food. I didn’t know what tajine was but my mouth watered for it. I fell in love with the idea of the country before I even got there.

Now, I just want to say that my limited experience with and perspective of Morocco in no way reflects the vastness of this very richly diverse country. I was there as a Peace Corps volunteer, not a tourist or a traveler, and I was only there for six months, with the majority of that time under a travel ban which prohibited me from leaving my region. It’s an interesting phenomenon how we sometimes will visit a place or even live there briefly and then feel a sense of kinship or ownership to that country and culture, as if we are the experts in a conversation, despite the fact that we really have and are no such thing. That being said, I did get a taste of a few different areas in Morocco and I hope to honor it by sharing it as best I can. Here are some of my main takeaways, and advice for anyone looking to add Morocco to their travel list (once the borders reopen).

Morocco is such a rich and diverse country, both geographically and culturally. Geographically, when I pictured Morocco in the past, I would think of the desert, but I came to see they also have beautiful mountains – the Rif and Atlas Mountain ranges, and areas that get super green in the spring. They have beautiful beaches and waterfalls as well. I thought it would be hot all over, but some highly elevated places—such as my permanent site assignment—got very very cold in the winter, even down to 20 degrees Fahrenheit. The big cities are pretty developed, in fact the ones I’ve been to felt European, but the small towns and villages, where you won’t see many tourists—unless just passing through—are quite different.

On the cultural side of things, obviously there is a lot of Arab influence, but what I didn’t know much about before going there was the indigenous people of Amazigh background (commonly known as Berbers, however this name is slightly offensive). There are three different Amazigh languages—Tamazigh, Tashla7it*, and Tarrafit, all spoken in different regions of Morocco. Some Moroccans don’t even speak Arabic at all. Traditional Amazigh people dress slightly differently and have very fun wedding traditions– also face tattoos are a thing. There is some conflict there, as with all indigenous cultures that aren’t properly preserved or respected by the colonizers, but a friend of mine once told me “Underneath every Moroccan is an Amazigh,” meaning we’re all really Amazigh people anyways. He of course was Amazigh. Unfortunately, my site didn’t have much of that because it wasn’t in one of the heavily concentrated Amazigh regions (which are mainly the south and the Rif mountains where they speak Tarrafit).

Honestly, my six months living in Morocco was really difficult, but not because of the country or culture itself. It was just hard spending three months in intensive training with so many cultural adjustments and language barriers. Emotionally, it was fairly exhausting. But from everything I’d heard from other Peace Corps Volunteers, it would also have been the most challenging part of my two years’ service. So I mourn what could have been, the relationships I could have deepened, and the places I could have visited. But I am still grateful for the experience I was able to have and the people I was able to meet. At times it’s hard to share my experience because I want to be authentic and honest about it and not paint an unrealistic fairytale, but I also don’t want to be overly negative. I hope I can share the most beautiful parts of my experience with Morocco and that it can guide others if they choose to visit one day!

Despite all the beautiful geographical features of Morocco, the people definitely had the biggest impact on me. Two families with very little for themselves offered up their homes and the best of what they had, adopting me as one of their own. And countless other families who didn’t host me still treated me as if I was a part of their family, made me feel so welcome and so loved and looked out for. Because that’s what they do in Morocco, they look out for their neighbors. That’s the spirit of Islam as I know it. Visiting Morocco just wouldn’t be the same without those local connections.

My wife and I received a notification from Pomelo about cheap flights to Peru. We jumped on it as soon as possible and within an hour we had booked two round trip flights for $500 a piece. We had never seen prices that low.

Because we found flights that were about $500 cheaper than we were originally expecting, we decided to put together a humanitarian project and do some good while we were there. We sent an email out to an organization called El Hilo Rojo, which is an NGO in Esperanza, Peru that helps educate children that do not have enough money for the school system in Peru. Many of the kids are orphans as well.

We asked what they were most in need of and they responded with a list of common school supplies such as pencils, erasers, markers, notebooks, and backpacks. We then reached out to our community for any type of donations. We had many willing individuals donate money and the supplies requested. It was incredible. We filled two giant 50lb suitcases full of supplies and about 1000 soles worth of money – which goes a long way in Peru. We traveled about 3,865 miles with one hundred pounds of school supplies for this school. 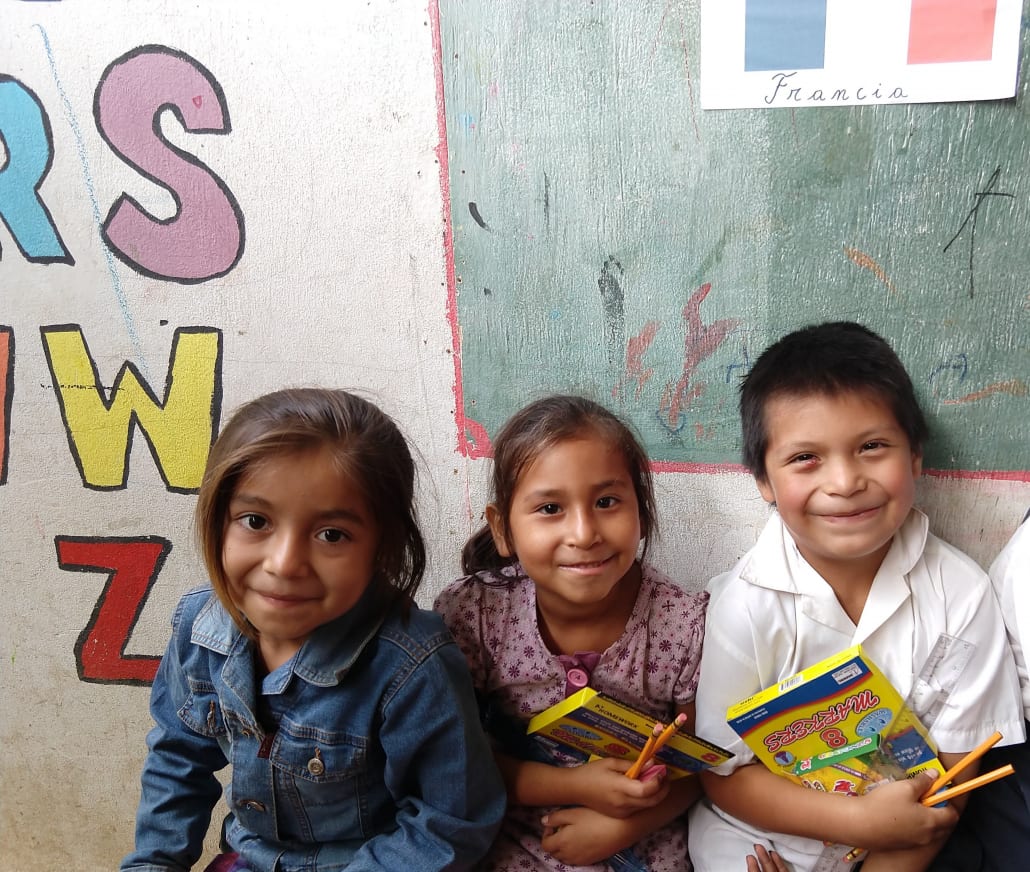 The day that we delivered the supplies was unforgettable. My wife and I have never felt so loved and appreciated in our whole lives. The kids started crying and were so happy that they finally had their very own notebook and pencil. The director of the NGO could not stop thanking us.

After dropping off the supplies we then took the 1000 soles to a store in the area and bought a couple months worth of food for the kids. Many of the kids do not receive breakfast at their home and come to the school hungry and unable to learn. The director of the program said that this was one of the greatest needs that they had.

We purchased about 150 pounds of oatmeal, 72 cans of milk, and other types of food. It was an amazing experience and we will never forget the look in the eyes of the children — they didn’t know how to thank us, but they did more than that with their smiles.

Thank you for allowing us to share our story with you and for helping us find the means to make this story a reality.