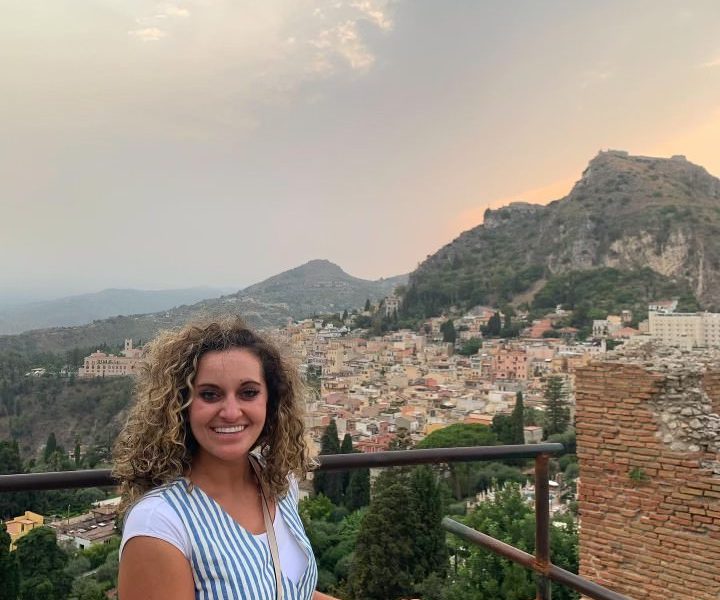 I had been looking forward to August 4, 2021, for quite some time, but little did I know that Delta had been impatiently waiting for that day as well. After the pandemic had halted my family’s travel plans the previous summer, we were finally making our way back to Italy to visit my relatives, many of whom I had not seen in five years. I remember being slightly confused when my mother told me we were flying to Rome through Delta. We had always flown to Europe on many foreign airlines: Swiss Air, British Airways, Iberia, Lufthansa, Alitalia…but never an American company. I quickly forgot about it until the day we arrived at the airport.

After being pulled to the side to show our paperwork, certifying that we had been vaccinated and that we had filled out the appropriate forms, we took our seat at the terminal. The first thing that caught our eye was the giant Italian flag, balloon columns, photo booth, and glowing letters that spelled out DELTA. I had been flying in airplanes since before I could walk, and yet I had never seen anything like this. Eventually, a few employees carried out a large banner that read, “Delta Inaugural Flight, Boston-Logan to Rome-Fiumicino.” We were starting to piece together that something important was happening. 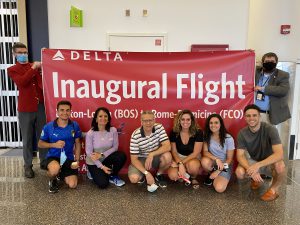 Thanks to my brother’s extensive airplane knowledge and the nearby workers, we discovered that we were about to take Delta’s first-ever flight to Rome. We were handed Sharpies and asked to sign our names on the banner to commemorate the occasion. After that, a table was laid out with numerous pastries from the North End, Boston’s well-known Italian neighborhood. A saxophone player joined in to serenade the excited passengers as we flooded the area to claim the sugar-dusted desserts. The ceremony was complete with ribbon-cutting and a speech. 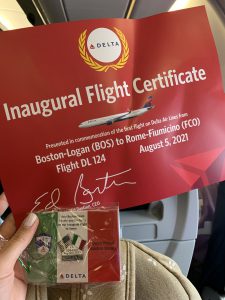 To my understanding, Delta had been trying for twenty or so years to make this flight happen, but something had always gotten in the way. They are the first American airline to offer a direct flight to Rome. The jubilee was completed with free tote bags, a certificate, and a commemorative pin for each passenger. It truly was a festive occasion, which seemed fitting as many of us were also celebrating the fact that borders to Italy were even open after such a complicated year. Excitement was in the air as we buckled our seatbelts and prepared for take-off.

After arriving in Rome we took a connecting flight to Sicily, our original destination. My father was born and raised in Catania, and we spend most of our trips to Italy in that area. Though the island is filled with European tourists, I feel as if it is often overlooked by Americans, who prefer to visit the traditional cities farther north. 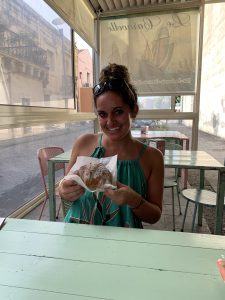 Cornetti for less than 2 euros!

One of the best parts of Italy is the food, of course! A traditional breakfast dish in Sicily is warm brioche with granita, which resembles sorbet. It is available in many flavors. Another personal favorite of mine are the cornettis (croissants) which can be filled with Nutella or cream, among other options. The ones I would get at the cafe next to our apartment were enormous and cost less than 2 euros! Arancini is another Sicilian must-have, which are deep-fried rice balls coated in bread crumbs and often stuffed with peas, sauce, cheese, and meat. Lastly, pasta di mandorla is something I’ve loved since I was a child, which are cookies made from almond paste.

The blazing daytime temperatures leave you with little choice, you either go to the beach or suffer in the heat. Luckily, the ocean off the coast of Sicily is some of the most beautiful I’ve ever seen. The water is crystal clear and flat, thanks to the large rocks that make up the shore and the ocean floor. My family often compares the ocean water here to a swimming pool because of how see-through it is.

Taormina is a beautiful city high in the mountains, which boasts the remains of an old Greek theater. Nowadays the location also features several stores and restaurants hidden on winding roads. The view from the piazza is beautiful and shows off the coastline. Another place to explore is Catania, where a train will take you around to show some of the more popular locations in the city. One of these is the remains of a Roman amphitheater. Next door is the Castello di Aci, a castle from 1239.

In addition to this, the town of Giardini Naxos, a former Greek colony, is home to an impressive marina where you can rent boats for an afternoon on the water. It’s also hard to forget Mt. Etna, an active volcano whose eruptions shook the sky the first week we were there, waking many from their sleep. Luckily it is harmless! There are numerous other sights to see on the island. It is definitely worth adding to your travel list! 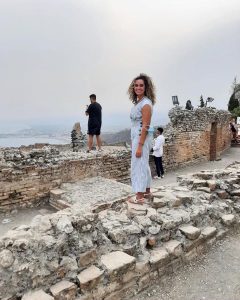