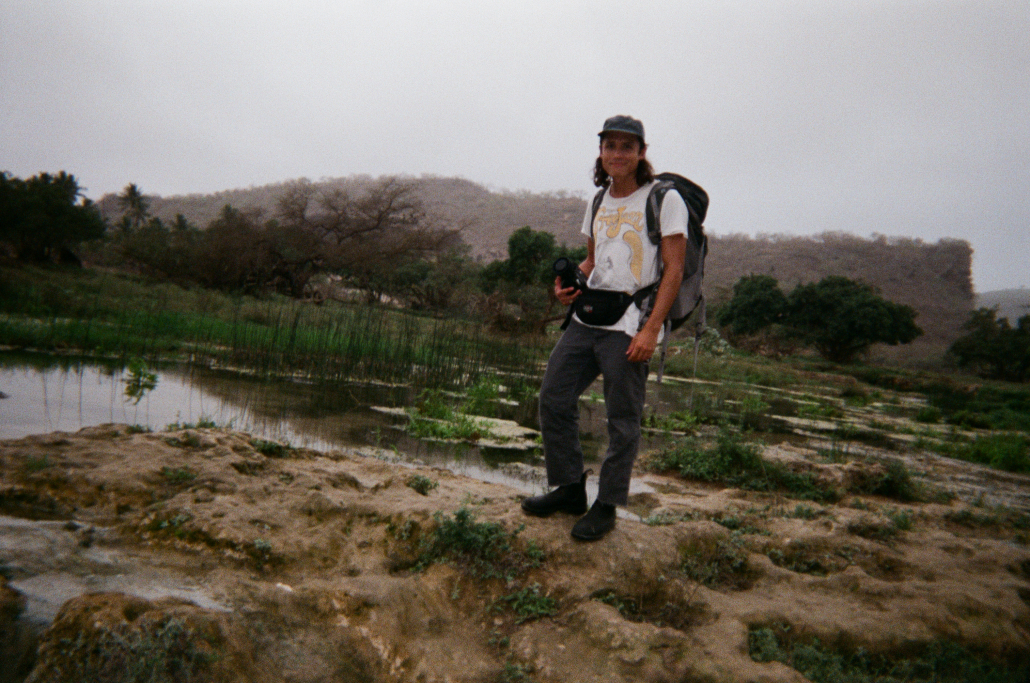 I mostly find myself dwelling on the past these days.  When you’re looking back, you don’t have to deal with the uncertainty as much as you do when you look at what’s ahead. 2019 proved to be a quintessential year for my own travels and wanderings in strange lands, as I’m sure was the experience of many others. But now as I wait for the world to open up, I wander in my mind to the surreal dream of Summer 2019.

During the summer of 2019 I was living in the gulf state of Qatar, visiting my parents. After spending some time there, I started dreaming of escaping the bustles of suburban life in Doha. Despite its domesticated charm, I wanted to get away to a much more isolated and solemn place. I was craving nature, the exotic, openness, and the sense of freedom that comes with escape, in exchange for the confines of the concrete jungles and the environs of Doha’s oil-rich-suburbia, with all of its mechanistic efficiency.

Throughout the beginning of summer, I was contemplating where I could go to experience this sense of the “new”. Incidentally, traveling outside Qatar would be a convenient way of allowing me to renew my traveler’s visa, since it would soon be expiring. Being in that part of the world has its benefits, and finding myself in Qatar was lucky because the country serves as a gateway to so many exotic locations within the Middle-Eastern world, for only a modest fee.  After talking with a few friends in the area, as well as my parents, I eventually set my sights on the desert town of Salalah in Oman. With no concrete plans (other than airfare and unpredictable couch surf accommodations) I took my first stride towards Salalah.

My interest in Salalah was mostly due to the fact that the Khareef Season (Monsoon Season) was approaching.  During the Khareef season, which begins from late June to early September, this arid desert transforms into a lush green oasis. The greenery and vegetation will make anyone question whether they have actually booked their trip to the right place, considering the Middle-East’s reputation as a dry locale.  Indeed, the greenery was so pronounced, that there were actually a couple moments during my trip that were reminiscent of a previous trip to the highlands of Scotland a few years back, just an example of how lush the scenery was.

The green colors were especially prominent driving towards (and within) Wadi Darbat (Darbat Valley). This area undergoes a beautiful transformation during the fruitful season of the Khareef. Dried up river and stream beds become flowing fountains of tranquility, desiccated steep cliffs miraculously give way to refreshing waterfalls,  and the dry desert weeds evolve into friendly ferns. I still can recall the solemnity and peace I felt there while just simply standing, absorbing the scene. The air was still, amplifying the sound of the gentle river and small falls. 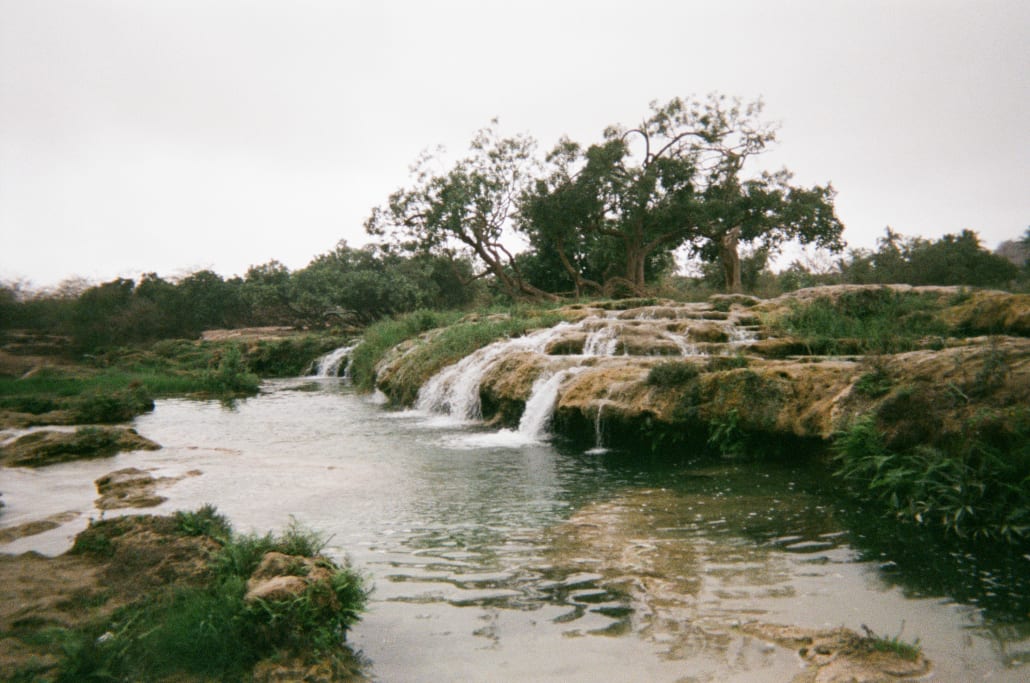 When I was there, near the water, were several local individuals and many families spread out on chic artisan rugs, enjoying a nice picnic. A couple college age locals also mucked about in the shallow stream puddles, surveying the water for dinner. During that day, I ran into one family in particular from Saudi Arabia. They offered me cookies and then we exchanged some pleasantries.

It turns out that they were visitors as well, taking advantage of this beautiful spectacle that occurs once in a blue moon. The conversation led to an extended invitation to visit them in Saudi, an invitation for which I was grateful and flattered. It seems to me that moments like this are seldom to be found, especially in this day and age when talking to your neighbor is a rarity and the only thing that separates us is a giant picket fence sometimes called a smart phone. I cherished these moments with strangers, especially more so out in this oasis. 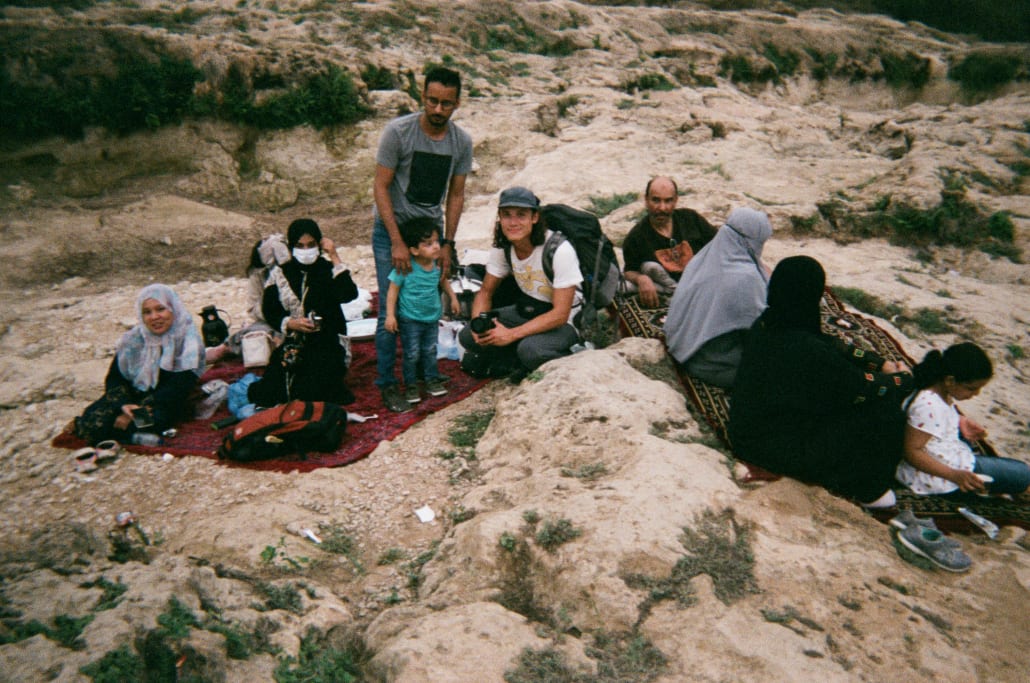 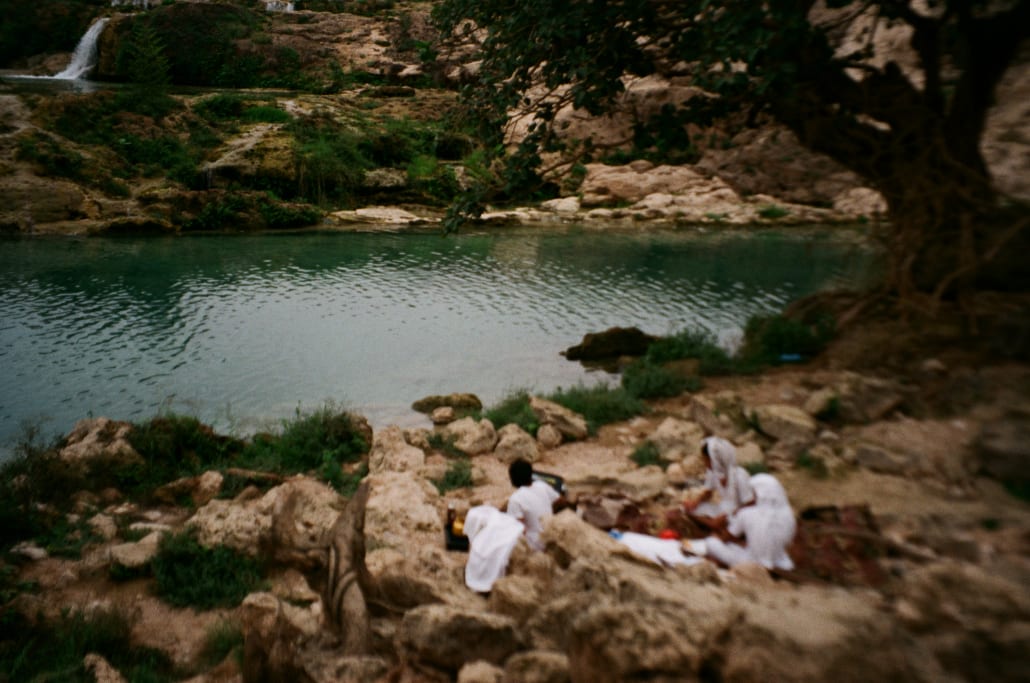 A few locals on artisan rugs lounging next to the river at Wadi Darbat.

Wadi Darbat is just a sample of the other experiences that Salalah has to offer. Driving along Al Sultan Al Qaboos street for about 24 miles southwest of Salalah, the traveler will enter a no mans land of mystical desert, full of intrigue, and if you keep going you will soon find yourself at Mughsail Beach. The views here are of epic proportions.

Anywhere you walk is a scenic vantage point. When I was there, I remember the ocean being fierce that particular day, roaring and colliding with the green algae infested reef. Although the sea and wind were strong, the sunlight made it all the more pleasant.  I managed to climb up to a higher vantage point where I could get a panoramic view of everything I was perceiving. All my internal troubles seemed to diminish. I had never been to a place that surreal before, it was the only word on repeat in my mind as I stared at the scene before me. 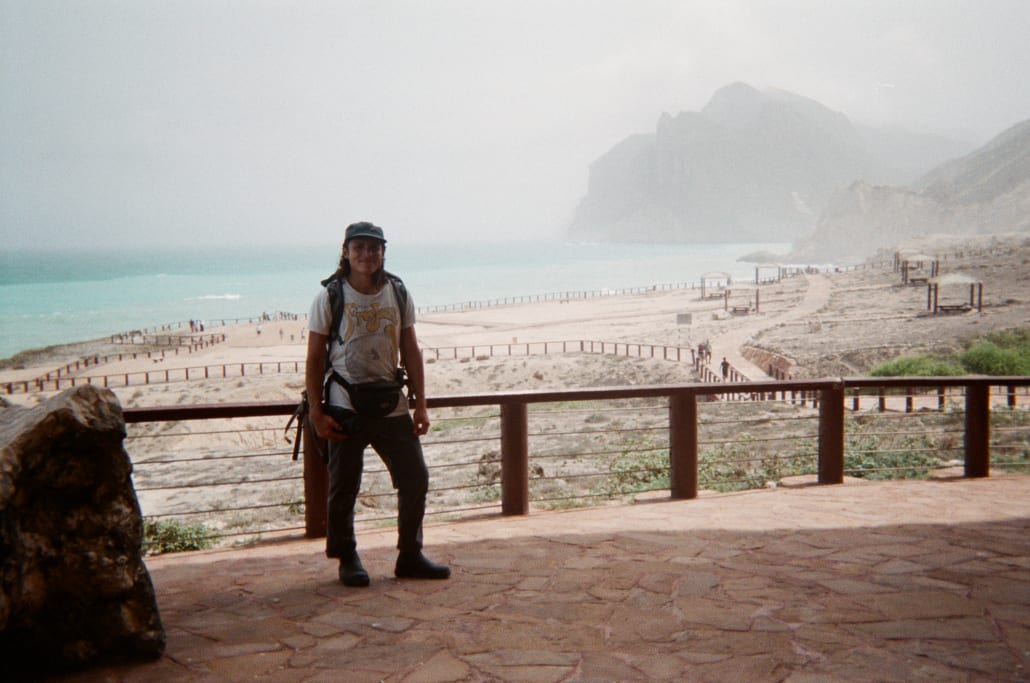 Enjoying the views at Mughsail Beach. 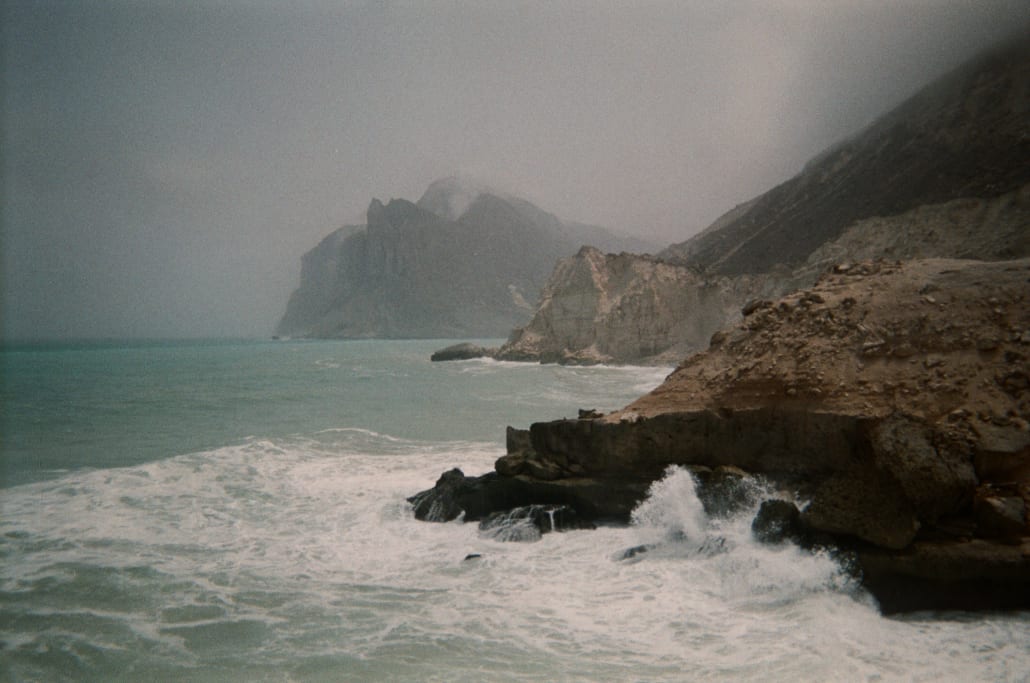 I felt similar feelings at Tawi Ateer, Teeq Cave, and the views up on top of the mountain Jabal Samhan. Tawi Ateer and Teeq Cave, both large sinkholes in the Dhofar Governate, were a little more somber and subdued. There was a subtle wind there, and no ocean to liven you up, but that was okay because the peace compensated for the quiet. Tawi Ateer or also known as the “Bird Cave” was quite the hole in the ground, and I was told that it’s as steep as the Grand Canyon. The only difference from that American landmark was that it was overtaken with green.

All the canyon walls with their crevices and cracks were spewing out plants, making it a suitable dwelling place for many birds. Being outnumbered in nature is a pleasant feeling. It was only me, Mustafa (my host) and his friend Abdul, outnumbered by what seemed like hundreds of birds, all speaking a language I have never understood but which has always brought good subtle feelings. Although you couldn’t see the birds, they were very much present.

Teeq Cave hadn’t been overtaken by as much greenery, and the birds were significantly fewer. It seemed to be enshrouded in mystery– just this massive ground cavity in the middle of nowhere.  Peering out over the edge, I felt like I was re-living Charleston Heston’s character’s journey in the intro of Planet of the Apes, when he was overcome with curiosity and intrigue on a strange new planet. 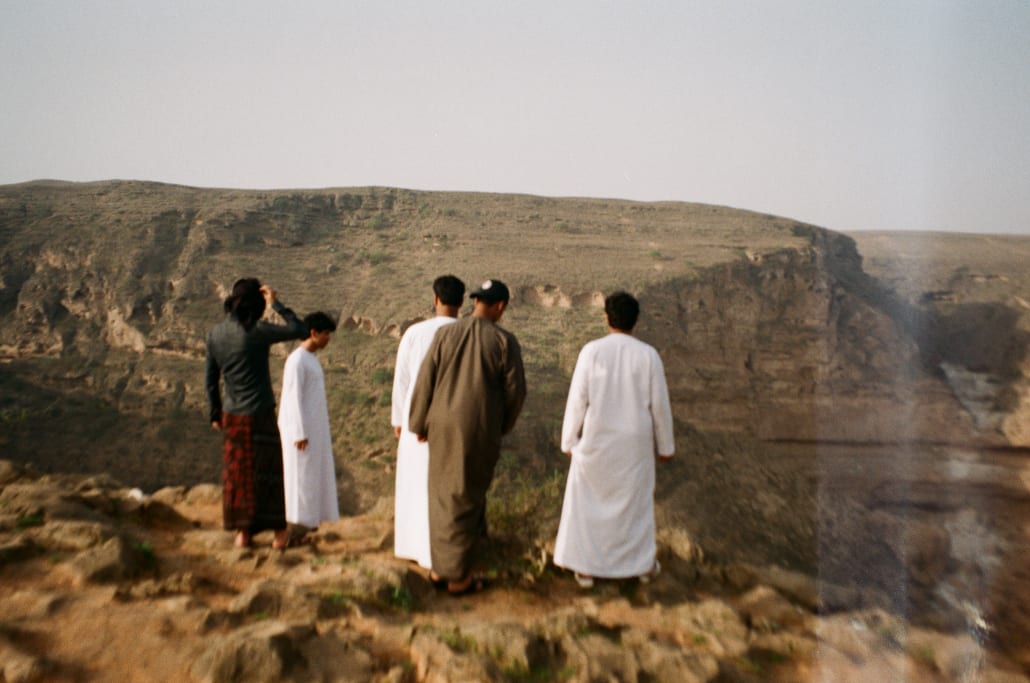 Abdul and a couple locals at the edge of Teeq Cave.

After Teeq Cave came a scenic drive through rocky dry terrain, scenery which resembled pieces of southern Utah. Parts of that drive were slightly overcast, but the high mountain elevation pierced the clouds, the air opened up, and soon we could look out the car window and we felt like we were dwelling in the clouds. The views on top of Jabal Samhan were quite impressive, an obvious understatement. There you could see the valley floor slowly leading towards the horizon and dipping into the Arabian Sea. The air was dry, but fresh, and at that height a bit of adrenaline rushed into my body as I was taking in the view. 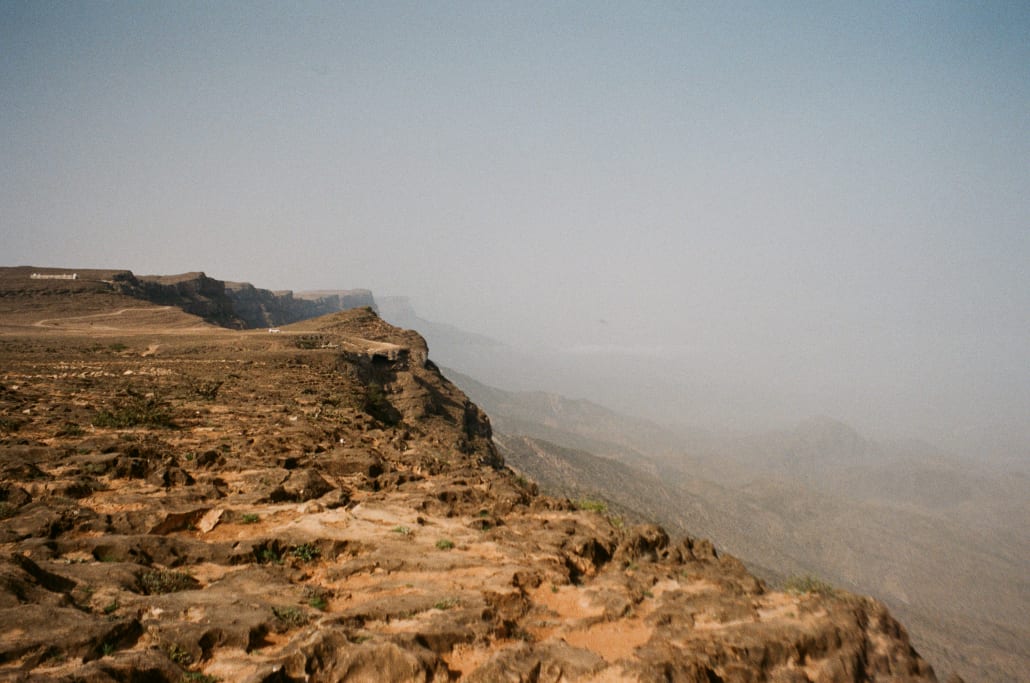 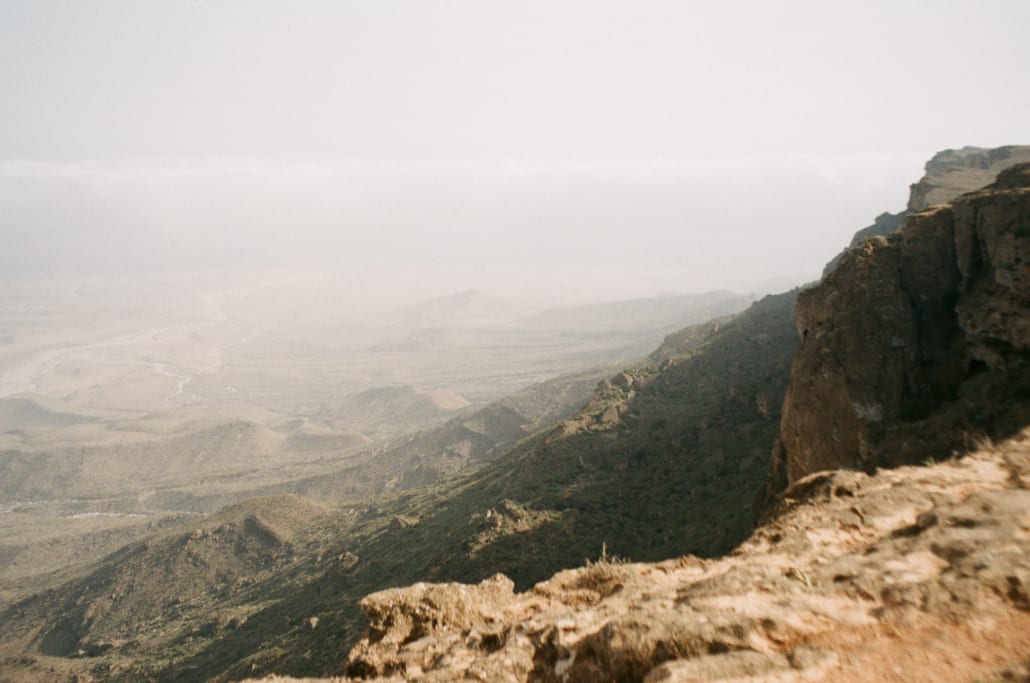 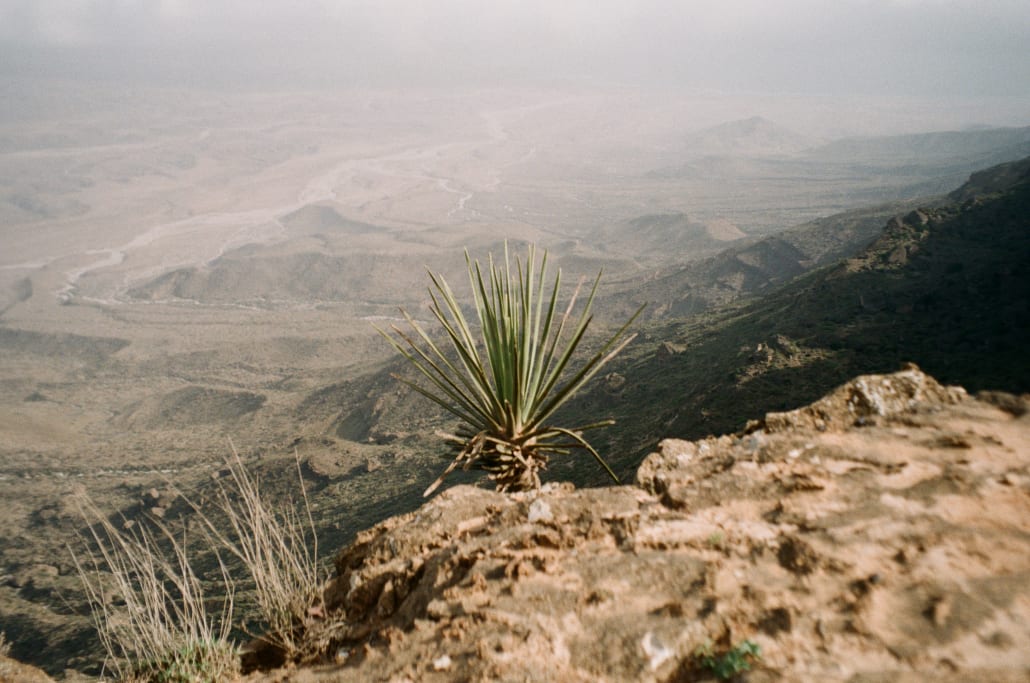 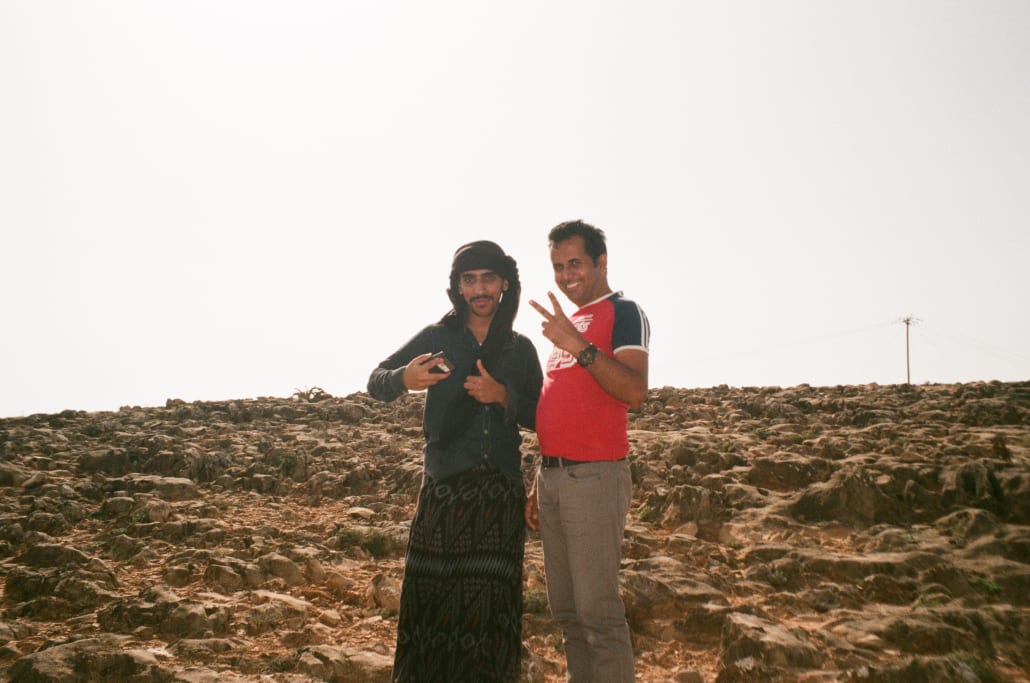 The Goodness of Humanity

Aside from the stellar views and overall nature immersion, which left me with very fond memories, I was left with some good impressions of humankind.  Salalah is no stranger to kindness and friendship, and most people I met along the way were gracious and giving. My host Mustafa and his Brother Kasim were more than gracious.

Originally from Pakistan, both brothers have been in Salalah for 15 years managing their small family venture, an event lighting and rigging business. Although they were preoccupied with work, we still spent a considerable amount of time together visiting nearby sites or eating at the most authentic Pakistani restaurants. Each occasion was interjected with facts and excitement for the place they call home. I was inspired by their ability to give and share with me, especially having only known me for a mere 4 days. 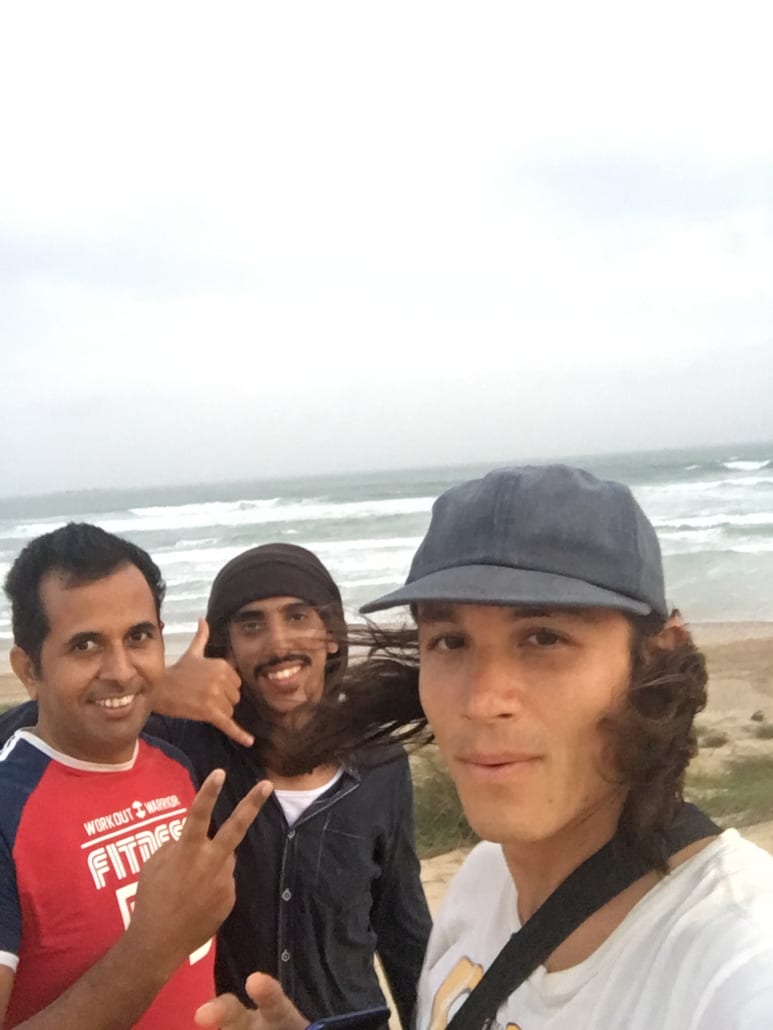 Musafa, Abdul and I (from left to right)

It’s been a year and a half since my days in Salalah and to say that life has become quite strange now is almost a cliche during this pandemic.  However, the sweetness from trips past still resonates and whispers a gentle reminder of life’s sweet worth. The people, the places, and overall experiences of yesterday provide me with a sense of gratitude and overall optimism for future travel endeavors. Hopefully those skimming through this reflection can find a sense of hope and recover some enthusiasm for travel in upcoming years. Cheers.